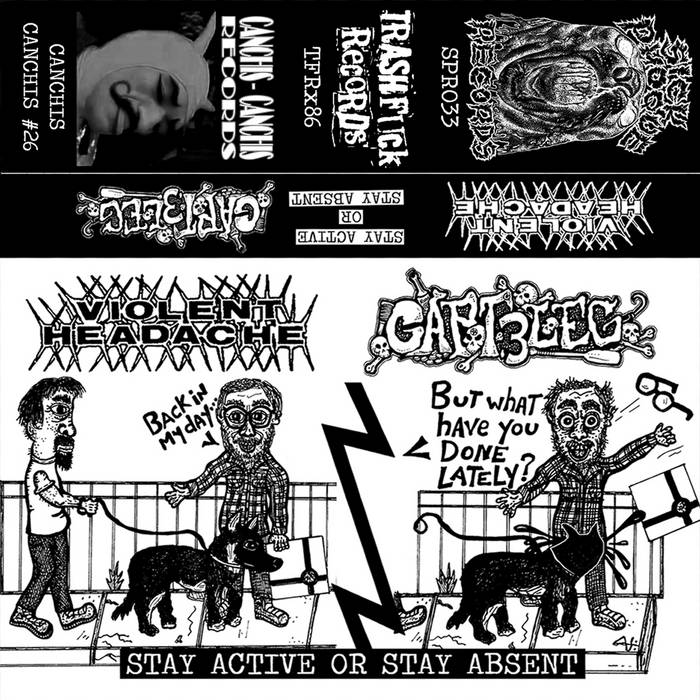 Tracks 1-9 = Violent Headache
Music recorded in rehearsal place back in 2008, vocals added by Marc in 2017. Originally all of the songs (except #9) were for an unreleased full EP on Rotten to the Core Records.

C-
Track Name: Hurt In the Feelings
Tumblring into the wretched pits of despair
I bleed my life for you, but do you care? No fair!
Now I can’t get out of bed to share. Shell shocked.
Notice me here! Atheist slob
Battles I’ve been through have rendered me crushed
Iraq was a cakewalk, Nam was for punks
My online mission to enlighten the Twits
Was worser than seeing your best friend blown to bits
Post-Traumatic Blog Disorder
I’m hungry, yet too sad to make a run for the border
Yeah, you may have lost your legs,
but I got really hurt in the feelings
Track Name: Butt Crust
Blood and guts, tits and ass
Rebellious gash, butt crust
Turtle rabbit, ultra-fast
Horse's ass, butt crust
Motherfuck, fuck a duck
Bastardized, butt crust
Black or white, day and night
Steel and stone, butt crust
Straight and gay, work and play
Semen stain, butt crust
Sharp and dull, up and down
Here nor there, butt crust
Man and child, tame and wild
Spicy mild, butt crust
We've given up
We don't give a fuck
Track Name: Dalkin' the Wog
Andy woke up, walked the dog
Sucker took a dump
Dog looked at Andy strange
Smelled the steaming lump
Dog asked Andy “Why didn’t you use the toilet?”
Track Name: Treat Tickets
Draggin’ my ass to Little League
To appease the Gods of Sport
Sitting cross-legged picking weeds
While coach fumes and waves his arms
A sugar lightbulb appears – TREAT TICKETS!
SixSixSix Sixlettes – TREAT TICKETS!
Would you do it for a magic snack? – TREAT TICKETS!
Just make it through the game – TREAT TICKETS!
Racing to the counter
Chocolate gaped and mounted
Track Name: Melmac Is My Penis
Here I am, the Anal Dwarf
Creeping through the bushes
On my tippy toes
Peering through your window
By standing on your cat
Dressed up like Alf
Melmac is my penis
Ochmonek’s on alert
I am the Anal Dwarf
Think I’ll name you Willie
Your wife is now my Kate
This furball is your nightmare
Big bang in a black hole
Exploding white matter
We’re all made of stardust
A universe is born
I love kitty porn
Adore a hairy bum
Eat them when I’m done
Here I am
Track Name: Belvedere and Brian
Cozy up for the night
Cuddle together, turn out the lights
Belvedere and Brian is such fun
I sure hope it’s not a re-run
Mr. Belvedere asked Brian what he thought of his rear?
Brian asked Belvedere if he’d been working out?
The next day Mr. Belvedere made Brian breakfast in bed
Then Jimmy Walker made a guest appearance, everyone went nuts!
They just couldn’t get Jimmy to say ‘Dynomite’ so the show bombed
Track Name: Song Title
Lyrics, Lyrics
Song title
Lyrics, Lyrics
Song title
Track Name: My Pasta Was a Racist
Served me my pasta
How odd the shape
Little swastikas
On an SS plate
Italian fascists
Mussolini portrait
Oy vey!
I’m polite so I started eating
Smiled and gave them the thumbs up
I’m not too well versed on neo-Nazi cuisine
But frankly, this meal was quite lovely
They sieg heiled and I just waved back
Track Name: Nope
Nope
Track Name: Mark My Turds
Mark my turds
Printed special labels to claim my dumps
Co-workers taking credit for the massive lumps
Glory thieves at the office suck
Jealous of my ability to sculpt post-modern muck
What can I say, I’ve been artistically blessed
Barry in accounting sometimes smears them on his chest
Track Name: The Conettes
Vinnie Vincent stepped into jail and
There waiting for him was Chuck Berry
Ghost Ike Turner and Ghost Rick James
Phil Spector said that he’d be the producer
Got an Aryan transvestite to play garbage cans
Called themselves The Conettes, that was Spector’s idea
Gene Simmons tried to sue them for no reason at all
White Trudy said the drums sounded flat So Vinnie
Vincent –
Put dead dogs inside them and the band went gold
Gold!
Track Name: Castaways
Gilligan pissed the Skipper off
Flipped out of his hammock
And hit his head
When he came too
You won’t believe this shit
The Skipper thought he was Mr. T
And Gilligan was a vampire bat
Now what the gosh darn heck do you think about that?
Just think about that!
Track Name: Beginner's Luck
16 years, you can finally drive
Wrecked dad's car and almost died
Fuck off!
Track Name: I Hate Music
(cover of The Mad)