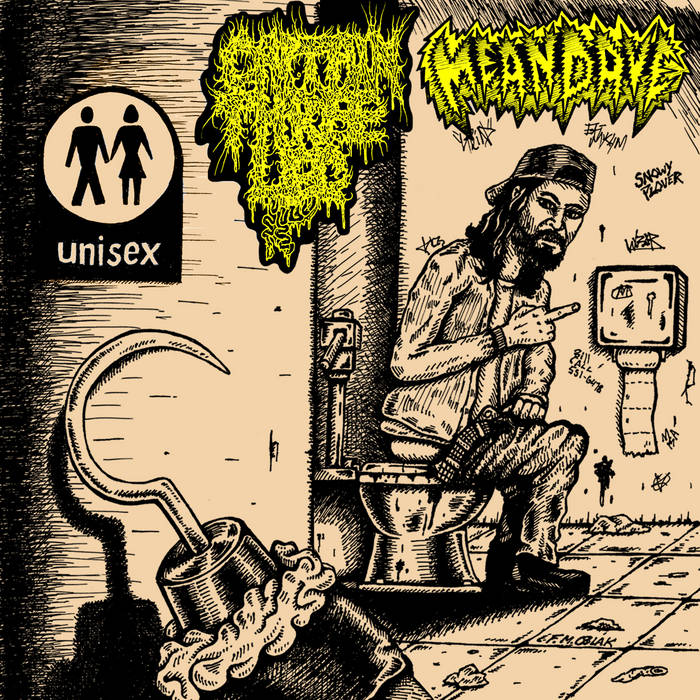 Forged in a fire of bad sex, bad parenting, bad culture, bad food, bad bands, bad people, bad places and bad things, Mean Dave is a comedian who thought he was a musician the same way Happy Gilmore was a golfer who thought he was a hockey player. This release captures two unique performances of his comedy act performed in the SF/Oakland Bay Area, recorded for posterity before he winds up on TV, or murdered, or both. Captain Three Leg, Iowa’s longest running grind/hardcore/whatever band, digs into the archives to perform new versions of songs they wrote when they were still squeezing zits in high school. Plowing through 20 songs in 15 minutes, C3L tackles timeless, hard-hitting subjects like public restrooms, hot chocolate, and cannibalism.

Tracks 1-18 = Captain Three Leg, recorded October 13, 2013 on a Fostex XR-7 Multitracker with additional overdubs done with Reaper + mastered by Stumblefuck at Hundskit Studios. All songs written by Unisex (Shepard/Hoff/Koettel/Carroll) in 1993.

What did I do to this non-social asshole?
He’s looking at me like I just fucked his mom
His eyes, his eyes look like cherry bombs
Cherry bombs

Please, please be my friend
I thought we’d be together till the end
Now I’m all black and blue
But I still say…

I like you (x3)
I like you, you, you and you
Track Name: Captain Three Leg - Duck Crossing + Got No Teeth
DUCK CROSSING
Quack, quack, splat!

I wish people would just leave me alone
So I can get some sleep at home
Kids running around making fun of me
Oh, please God, let me be

Nuts and bolts falling down
The blades rip through your head
Your blood splatters on the wall
Sit and laugh while you lie dead
Track Name: Captain Three Leg - Abandoned Brandon (King of the Dancefloor)
Left on someone’s front door
When he was only four years old
Parents didn’t like him at all
Unwanted and completely alone

People came from miles around
Begging Brandon to display his stuff
He would say “Get out of my way.
This dance floor has my name all over it.”

Brandon, please dance with me
Feet shuffling like Fred Astaire
Brandon is the dancing king
Look at him go, it’s really amazing

Brandon’s life is sublime
Things couldn’t be much better

As the liquid flows down my throat
I regain feeling in my toes
The warm sensation, don’t stop there
Drinking my cocoa in my underwear

Marshmallows on top
Keep them coming, just don’t stop
Drink it ‘till it’s gone
Oh, hot chocolate you’re the one for me
When it is cold outside