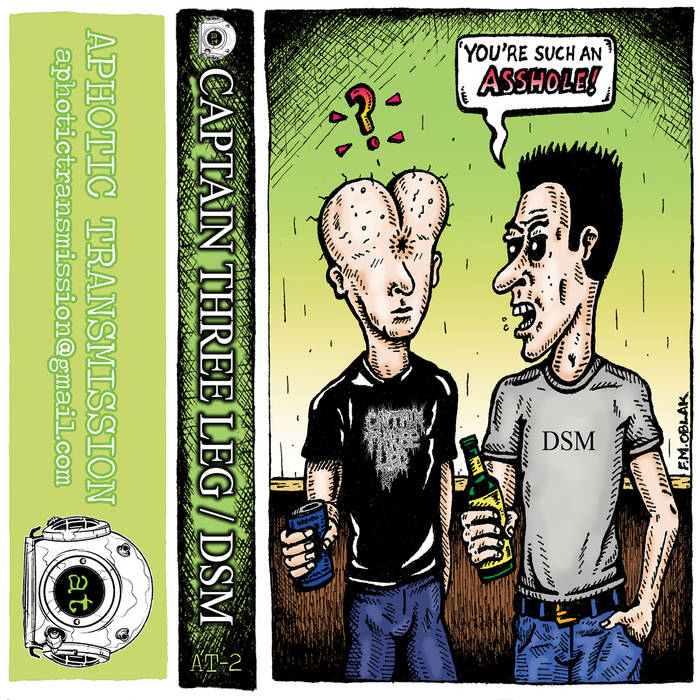 Recorded with Reaper on March 15th, 2015 with additional overdubs and mixing over the next two months.

All songs written and performed by Captain Three Leg except "Get Tough" (Bad Posture). Lyric assistance on "DreamRoller" by Auen & Kutsche, ukulele overdub by Greg Peterson.

As time goes on, you're less enamored
Our friendship seemed in flvx
Your humor has deserted you
Now everything is fucked

You grit your teeth with resentment
As you gaze upon our split
Forever linked to our band
And you hate the thought of it
Track Name: Captain Three Leg - Stick and Poke
Teachers thought it was a good idea
They tried to scare us straight
Brought in loads of hesher teens
But no one took the bait

The thought never occurred
That I could fill my life with drugs
We have the school to thank
Now I wanna be a thug
Track Name: Captain Three Leg - Plus-Sized Grinders
Gaining some new fans
By catering to the extra-wide
The fat guys come on board
When we print shirts in their size

Drink from the plastic skull

Membership is low
So open enrollment is on

You stood and faced the class
When the teacher asked who's gay
You've never touched a dick
But you stood up anyway
Track Name: Captain Three Leg - Trap Treats
Give that mouse a treat
Before you snap it's fucking neck
Track Name: Captain Three Leg - Lyric Sheet Included
Trying to change the world
With the lyrics that you write
Screaming unintelligibly
No one can make it out
You've picked the poorest method
To get your point across

Lyrics filled with dick jokes
Is the path that you should choose
You should fucking entertain
Instead of delivering the fucking news
Track Name: Captain Three Leg - Boner Shame
Sitting with your buddies and you're watching TV
VHS tapes filled with all kinds of sleaze
Gymnastic sex and deplorable acts
The flesh is willing, but I've reached my max

You're not fooling anyone
You're in the bathroom jerking off
Save it until we all go home
Track Name: Captain Three Leg - Repeat Chorus
Getting to the part of the song
Where we shout out loud and sing along

Riding up to the mountains
To the weed castle in the sky
DreamRoller, roll me on up to space
Track Name: Captain Three Leg - Orgy of Terror
(no lyrics)
Track Name: Captain Three Leg - The Clap
(Instrumental)
Track Name: Captain Three Leg - San Francisco Diving Team
(Instrumental)
Track Name: DSM - Quills
Bow down to the Pyrrhic survivor spoiled by hypothermia, rotting teeth and brackish humours. I was once upon a time and I still don't remember. There was dirt on the lens, but if you must know, ask the flesh. Conditions elicited the responses. Conditions programmed the subconscious. But mind the quills. I bathe the flashing of fireflies in solvents. It helps with tics. Vaguely recalling buried fears of large men before vice mauls the body to keep the conscious encased in glass. Washed clean in artificial dopamine, non est tanti. Conditions elicited the responses. Conditions programmed the subconscious. Conditioned responses became toxic. These quills nailed shut my coffin.
Track Name: DSM - The Bends
Nitrogen bubbles under the skin. Unsafe levels of introspection and nagging under-stimulation stifle higher level thought as an endless internal barrage of "no" and "why" rains down like hammers tossed off of a second story balcony. Neurotransmissions descending and resurfacing like a porpoise. Gasping for air before the ballasts fill with bilge, plunging the vessel to the Stygian depths of rock bottom and imploding it like a beer can under a boot.
The boulder rolls back and flattens Sisyphus.
Atlas buckles and slips a disc.
Repeat.
Track Name: DSM - Bogart
The tarnished trumpet's herald and peacock cry laments a lack of any meaningful relationships. Ego-harangued discourse via miscued asides constantly excreted from your stupid fucking mouth.
Track Name: DSM - Absurd
You will know loss, embrace the contrast. Suffer through the pain, and know clarity. Bide your moment in time. Permanence and deeper meaning are an exercise in futility. You are ready to suffer until your husk is interred to the Earth as a memory that will last a single generation as you are recycled back into raw biological utility. Rank and file with the other seven billion walking slabs of weathered granite with no reason to exist.
Track Name: DSM - Maintain
Trembling and smiling hollowly. Picking at the steaming log of shit served to me on a perineum hair platter in the form of interpersonal bonding. Expiating my conscience to my Id while wading neck-deep in a septic tank stuffed with the lowest common denominator of human garbage. Idiots, cowards and fucking lemmings.
Tooth ground teeth.
Exhale and maintain.
Nail sliced palms.
Exhale and maintain.
Trembling again. Acknowledge and nod while feigning interest. Engage, asking the right questions. Day dreams. Thrusting my thumbs into those eyesockets and bashing that head into the floor until it stops screaming.
Someone please understand me.
Track Name: DSM - Wet Bandage
I'll taste your blood while you clip my wings. I've never played this game any other way. Let's hate ourselves for a little while as we figure out who we'll blame. Let's convert this porn into pain. This pulp novel beginning will shift into nightmare about falling. I'll eat, breathe, and ruin you on a softly moaned promise to nail me to a cross. Grant me the serenity to change as a man, and destroy when I can't. Trying on each others prosthesis until we find reasons to jump the next border. We'll never love again until the next time we die alone.

I convert this porn into pain.
Track Name: DSM - Parched Vines Wither
Eschew your collar, loneliness is godliness!
Sever all ventricles and cauterize remaining pride.
Siamese in twain, yet half a heart still beats as one!
Atrophied muscles pump unbound, growing strong again after the waning of enough time and regret. Convalesce, then never again; pending fuzzy handcuffs and a fucking gun to my head.
Track Name: DSM - Ape Hive
Frontal lobe disengaged to facilitate growth of ganglia. Worldly skin tempered and leathern from time, salt, and scar tissue. Glazed eyes reflecting defeat. Willingly embraced, the passivity of an omega existence reserved for frog food and eaters of shit. Autonomy subjugates passion.
Lobotomize thyself and banish the ghost. Assimilate into your role, and be the bug. Through cowardice, you lay forfeit the one thing separating Man from the fodder. Climaxing at the fate of curled grubs writhing in dirt.
Blind.
Numb.
Track Name: DSM - The Iron That Surrounds
I am co-dependently yours. Your monolith of basic needs. Just nest inside and live forever. Just sing to me. You are my phoenix, snuffed under a blanket of manifest destiny. I'll oblige, and flex those thrashing night terrors into broken blood feathers, so shriek, and bleed within me! Slowly drain into the excrement-covered floor of the cage for wounded birds. Your self-inflicted bald patches from duress will be preserved as it were. Cast into a shoe box, then an unmarked grave.
Track Name: DSM - Skin Upon Water
I am boundless psychic electricity trapped in a vessel of rotting meat and aspirations that is collapsing in slow motion.
Skin upon the water.
Flies gathering around my lips.
As nothing manifests, over and over again.
Smoke-stained grey matter formulates matrices into barbells and helixes of infinite possibilities, yet here I fucking sit.
Over and over again.
Violently cycling stagnation.
Burning days and depleting essence to power the algae blooms as I wait to die.
And I'll keep waking up.
Over and over again.
Manifesting only skin upon water.
I'm the dead weight in my own life.
Track Name: DSM - Cud
Trapped in a skull with an ever-bruxing pre-frontal mandible. Watch us beat this dead horse into a paste.